Eliot’s partner, George Henry Lewes, encouraged her to write fiction – she took inspiration from her childhood and life in the Midlands. She chose to write under a pen name, as she felt women writers were not taken seriously. Her pen name also gave her protection from the scandal her relationship with Lewes caused. She chose George, after Lewes’ first name, and Eliot as it was ‘a good mouth-filling easily pronounced word’. Her first fiction was Scenes of Clerical Life, published in 1857. This was a collection of three short stories using her memories of the people and places around Nuneaton. 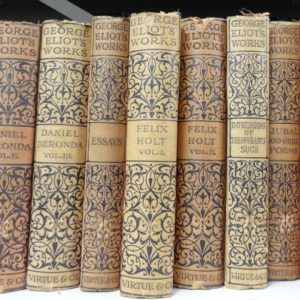 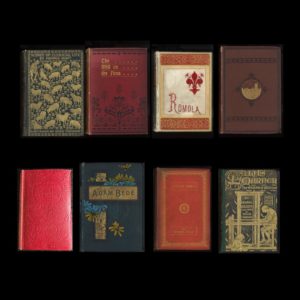 After publishing her second book, Adam Bede, she was forced to reveal her identity. In Nuneaton, a local man, Joseph Liggins, claimed he had written her books. She wrote to her publisher William Blackwood and agreed to be acknowledged as the author.

Her confidence grew with Lewes’s encouragement and she continued to write about what she knew. Middlemarch is based on her time in Coventry and deals with lots of important issues of the day. This includes the right to vote, industrialisation, the railways and even medical developments. She also wrote about personal issues important to everyone: family life, love, loss and wealth and poverty. In Daniel Deronda she focused on the Jewish community, and Romola was set in 15th century Florence, Italy.

Although Eliot was extremely successful, she still worried about reviews. She wanted to be accepted as a person as well as a writer. Lewes shielded her from unkind comments in the press and supported her when she doubted her abilities.

Her brother Isaac only resumed contact when she married John Cross, not long after Lewes’ death in October 1879. Cross was a family friend and her financial advisor. They were only married for about 6 months until her death in December 1880. Eliot died from a heart problem after catching a chill.

After her death Cross edited her letters in his book: George Eliot’s Life. He retold her story in a complimentary light. He portrayed her in a way that her close friends didn’t recognise or approve of.