A woven silk bookmark depicting a scene from Adam Bede. 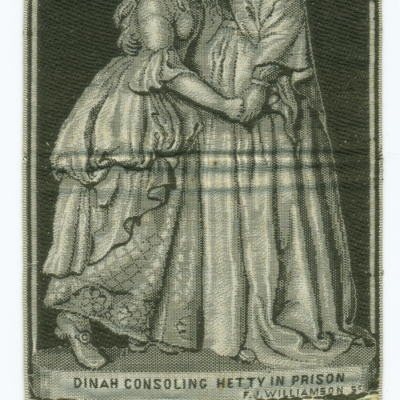 A woven silk bookmark depicting a scene from George Eliot’s Adam Bede. The text reads: ‘Don’t you know/me, Hetty?’ and is a rendition of Dinah consoling Hetty in prison.

The bookmark was made by Thomas Stevens, a nineteenth-century weaver from Coventry, famous for his invention of the stevengraph, a woven silk picture. Stevens was born in Foleshill in 1828, the same suburb of Coventry where Eliot resided in the 1840s.

Stevengraphs became popular collectable items in the twentieth century. Many of Stevens’ pattern books and creations were thought to have been destroyed in the Coventry Blitz during the Second World War. However, in the late 1950s, it emerged that a descendant had saved one of the pattern books the night before the attack. The book was donated to the Coventry City Council, who in turn entrusted it to the Herbert Art Gallery and Museum – where a large collection of Stevens’ work still resides.