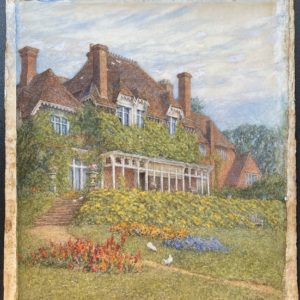 George Eliot and George Henry Lewes bought this country house in 1876 with proceeds from her novel, Daniel Deronda. George Eliot described the new house ‘Our bit of Surrey has the beauties of Scotland wedded to those of Warwickshire,…’. They planned to stay in the country but Lewes unfortunately became ill and died in 1878. Eliot married John Cross in 1880 and they spent time at Witley whilst the new house they had leased in Cheney Walk, Chelsea was redecorated.

The artist has written on the cardboard backing, ‘The last time my husband and I saw George Eliot was in 1880. When she and Mr Cross were staying at The Heights (in the drawing room overlooking a veranda) only a short time before her death.’