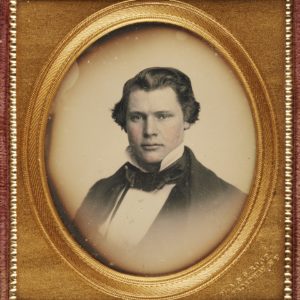 This is a photograph of Charles Bray, a friend of George Eliot. Charles Bray was a ribbon manufacturer in Coventry. He was also part of a group of radicals called the Rosehill Circle, named after his home in Coventry. This is a type of photograph called a Daguerrotype and was made by Marcus and Samuel Root of Broadway, New York.