Home Objects The view from the window at Rosehill, by Cara Bray.

The view from the window at Rosehill, by Cara Bray. 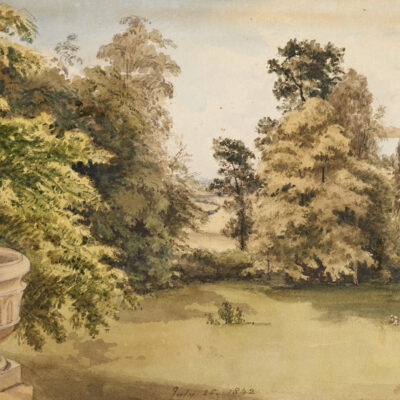 This painting shows the view from a window at Rosehill, the home of Charles and Cara Bray. George Eliot visited frequently, coming into contact with a wide circle of people and opinions, some of which were unconventional and even radical. This had a great influence on her intellectual development.

From 1841 to 1849 Mary Ann Evans lived with her father in a grand semi-detached house just off the main road in Foleshill, then a village near the city of Coventry. While in Coventry Mary Ann became friends with radical intellectuals known as the Rosehill Circle – headed by Cara and Charles Bray.

Mary Ann’s time in Coventry was one of change and personal development. It had a difficult start as she refused to attend church for five months which deeply upset her father – a period known later as the ‘Holy War’. Her growing friendship with the Brays led to Mary Ann being commissioned to translate from the German Strauss’ sensational volume ‘The Life of Jesus, Critically Examined’.

The end of her time in Coventry was overshadowed by her father’s illness and death. This led to the Bray’s taking Mary Ann on a continental tour which began her move from the Midlands to London and the launch of her literary career.