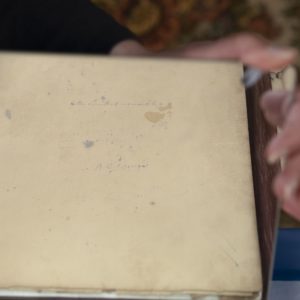 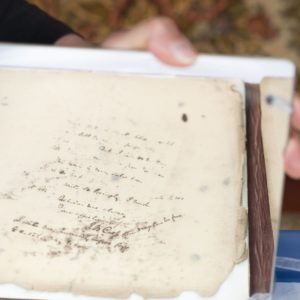 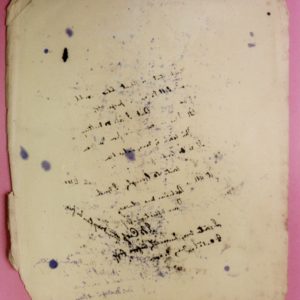 A blotter owned by George Eliot. The pages when held up to a mirror reveal her signature, ME Lewes (Marian Evans Lewes was one of the names she used) and that of her later husband John Cross. There are also names and addresses of people they both know including their piano maker and solicitor.

This sheet was found amongst paperwork due to be discarded at Yale University by someone cataloguing the library’s George Eliot documents. She was given permission to keep it. Later she asked Bill and Kathleen Adams of the George Eliot Fellowship to examine it. Bill stated on 26 February 1974: “Have little doubt that it did belong to [George Eliot] and John Cross. Both signatures appear and there seems no reason to doubt that they are quite genuine. Name and address of people they both knew, e.g. the makers of her piano, her Solicitor and T.A. Trollope… I am convinced that it is genuine.”

Blotting paper was used to blot ink and ensure it wouldn’t be smudged when folded and placed in an envelope.

Explore the blotter further in this short film.